How Much Can You Save?

Geothermal Heat Pump Systems use the Constant Temperature of the Ground

Despite changes in the weather, ground temperatures are a constant 55° all year.

Geothermal works because the ground beneath our feet is warmer than the outside air in the winter and cooler in the summer. Inserting a series of small pipes into the ground allows heat to be transferred to and from your home. In this process heat is not created, it is transported, therefore no fuel is burned. 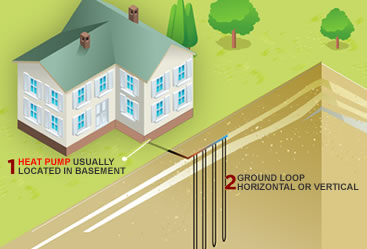 Two Pieces to the Geothermal System

Winter Operation: The underground pipes, called a ground loop, circulate water which absorbs the heat from the earth and returns it to the indoor heat pump. The heat pump extracts the heat from the liquid then distributes it throughout your home as warm air. With the heat removed, the water is re-circulated to collect more heat from the ground. In this case, the loop water is warmer when it comes into the home than when it goes back into the earth since the heat is being removed.

Summer Operation: The indoor heat pump takes the hot air from your home and removes the heat. This leaves behind cool air to be distributed through your vents as air-conditioning. The removed heat from the air is rejected into the earth through the ground loop. In this case, the water is warmer leaving the home then when it returns since heat is rejected into it. This is not a new technology, this is not a science experiment, this is not rocket science. In fact, in many European nations geothermal heating and cooling is the standard. In Sweden and Switzerland, more than 75% of new homes have geothermal. The EPA has acknowledged geothermal systems as the most energy efficient, environmentally clean, & cost-effective space conditioning systems available.

Johnson Comfort Systems, Inc. is proud to serve the people of Lime Springs and the surrounding area with prompt, quality service. We install WaterFurnace products which have industry leading warranties and performance. We pride ourselves on exceptional customer service. Call 563-566-2346 today to schedule a service appointment or for a free, no-obligation consultation. We’ll help determine the perfect system for your home or business. Our team services most major brands of geothermal and HVAC equipment. We’ve been proudly serving Lime Springs and the surrounding area with top of the line products, service, and maintenance for years and hope to do the same for you, give us a call today!